New Smyrna Beach is an old Florida beach town with a tourist problem, 300 surfable days a year and a surprisingly vibrant local music scene. People move there to get away from the traffic and noise of Orlando. A quiet little surf town full of familiar faces half remembered from blurred memories of half forgotten venues.

Obviously a punk-rock show there is an event not to be missed, so I booked a room, packed a valium and drove the 50 miles to NSB arriving just in time for drinks with friends before the first band set up.

The first band, IVVI Berry was good, groovey Shoe-Gaze. They claim to be Math Rock, but whateves. They put on a good show, however I felt the need to make fun of them for some inexplicable reason. I’m guessing a glance at the comments in their high school yearbooks would explain my gut feeling on the matter. Either way, it was a good set and found a pair of Costa sunglasses and a hash oil vape pen on the ground.

Birds on a Kill started off their set with a lot of energy and since this is Florida not everyone was wearing shoes; dad punk at it’s finest.

Around their third song things became fuzzy and I began experiencing personal earthquakes, possibly brought on by IPAs and whiskey. Nothing too serious though, the quakes being in the area of 5.6-5.8 on the Richter scale. I managed to snap a picture of the moment. Things were getting lively and I needed to seek shelter back at the hotel room, quickly.

“I’ve known Matt a long time, and when he starts repeating himself he is pretty hammered” -Danger Dobbs, member of the search and rescue team.

Because of the adverse conditions I missed Rush More‘s set, but I am sure it was stellar. In fact, my departure was so abrupt that friends mounted an abortive search and rescue effort. Despite numerous strategic and tactical difficulties my withdraw to the hotel room was completed with a minimal of casualties. I happened to be struck by falling debris. Or I fell into debris.

Regardless of the inherent hazards of falling debris and personal earthquakes, the show was a roaring success and I am looking forward to the next one.

G.I.S.M. is Japanese hardcore from the early 80’s and they were on the first Japanese hardcore compilation. Surrounded by a veil of secrecy and rumor, they haven’t played outside of Japan and are the very definition of underground. Singer Sakevi is supposedly a Yakuza member, with stories of him firing a pistol during shows, using a flamethrower, once stabbing a member of the audience for photographing him, threatening members of the press, throwing a cash register out of a window and threatening to kill the clerk of a store selling bootleg G.I.S.M. shirts, etc. The list goes on and on, but the music is even better than the stories.
Randy Uchida was easily one of the best guitarists of the era (was, because he died in 2001). G.I.S.M. has been labeled thrash and crossover as well as punk/ hardcore, any of which is an over simplification, there are even space rock sounds sprinked throughout their albums. They don’t sit squarly in any genre, more parallel to Swans and Burzum than “like” the Sex Pistols. G.I.S.M. is a must have for any respectable music library and far more playable than most bands of the era. Highly recommended.
Also, they have reunited and are playing at this year’s Roadburn festival in the Netherlands.

Disfunction played the other night at Uncle Lou’s, I arrived just as they were setting up, which meant that I missed the Filthy Dix play unfortunately (At least I didn’t miss both bands). Uncle Lou’s is an extremely small venue (like 1000 square feet) with low ceilings and bare concrete floors, so the acoustics make it sound like you’re at band practice. Immediately I noted how punk rock is the only genre that has a distinct smell to go with the sound. The stench of body oder was overpowering, cutting through the cigarette smoke like an invisible, noxious fog, silently seeping throughout the room, burning the nostrils like mustard gas. Just as I was expecting President Assad to appear on TV and explain why we were being asphyxiated, Disfunction started to play. And they were awesome, almost instantly the pit engulfed all but the corners of the room, a swirling mass of drunk guys running in circles pouring beer on each other. Disfunction was playing really well that night, along with the band practice-like acoustics made for a great show, it reminded me of the small DIY and house shows back from high school, sort of. The cloths are newer and most of the ladies are substantially larger, like, wow, much larger. But the show was awesome, easily the best show I’ve been to this year (so good that I didn’t even feel the need to upper-deck the toilet). 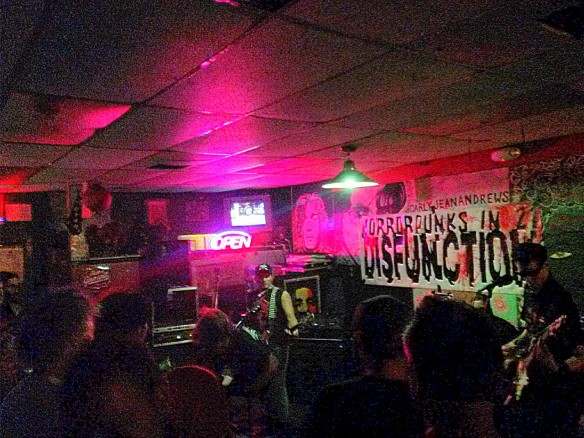 Funeral Parade is goth-ish punk from Oregon, made only one demo, and it is great. Short and sweat, highly recommended 91%.

Instrumental Black Flag from 1985… Danger Dobbs recommended this album and is quite fond of it and the jazz influences and undertones. This is defiantly exploring new territory and is a classic release, no doubt. Myself though, I don’t “get it” as an album. In fact, this album is probably a good example of why I don’t appreciate Black Flag; It is not that I think they are bad, per se, but it is obvious that there other people who like Black Flag far, far more than I do.
In fact there are so many people who enjoy listening to Black Flag that the government has stepped in and taken measures so that fans can not download a free copy of this album… 27 years after it was recorded, by a “Do-It-Yourself” movement… So this is a YouTube only post, again.
I am glad someone has nothing better to do than worry about shit on the internet.